Performed around the world

Short-christian-skits.com provides short christian skits and comedy sketches for use in church, Christian meetings and evangelism. Below are just a few of the churches and individuals who've performed our sketches. 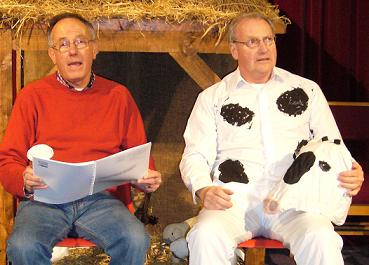 "The Little Baby Jesus sketch was performed at the Long Hanborough Methodist Church Carol Service on 18th December. It was received very well and started some discussion about how Christmas has become sanitized and fed to us as the Christmas card manufacturers would have us believe it happened. ......" Nigel James,

First Baptist Church, Catskill, New York - "First off, let me thank you for your commitment to the message of Christ through drama and for the discounted 5-pack of scripts (Christmas Collection). I thought all of them were fantastic......" Aaron Clause, 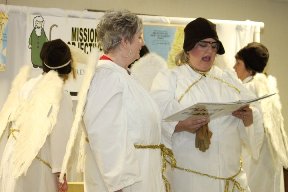 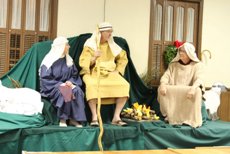 "We used these skits at our annual Ladies' Christmas Extravaganza @ First Baptist Church in Athens, Tennessee, USA, on December 3. The angels were scene 1 and the Shepherds were scene 2. It was well received and fun to do. Thanks, ......" Glenda Kyker,

We performed the sketch "Carpenter", about a year ago. The sketch, in fact, was very moving, and brought many compliments of how it touched so many lives. Thanks so much. We are hoping to organise a drama troupe to be used regularly in services. I am sure that we will need assistance, and I will happily pass on the information and requests for your expertise and talent. - Sherman Van Zee, USA

thought i would let you know that I performed Stoning yesterday at Yardley Baptist Church and Snake last week. Both went down very well and are excellent sketches which it was a pleasure to perform, I am already trying to work out when and if we can do Lent and Palm Sunday one. Thanks
Steve Green 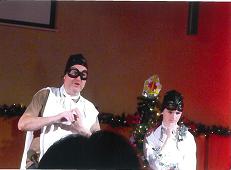 I performed the Angels sketch yesterday with my fourteen year son for Yardley Baptist's Carols by Candlelight service. We wore a costume of a biggles flight cap each with goggles and white angel costumes (on my legs I had to girl's white tutus, one for each thigh.) The sketch was very well received with a number of people loving the punchline about Mary.
Thank you for writing an excellent sketch, I am hoping to be able to perform the Four Kings sketch for epiphany. Have a happy Christmas - Steve Green

New Life International Church, Aberdeen - "Last Friday myself and 2 others performed 2 of your sketches (The Inn and Little Baby Jesus). This was as part of a Christmas concert which non Christian's were invited along to. It was very well received and the Church have decided that they would like to see more of that type of thing. Just wanted to say thanx and I'll probably be back in touch again soon." Ali McRae

"Thank you Graham, it's brilliant, lol. Will use this on Sunday. God bless." - Julie Lo, (Godwalking )

"Thanks so much for the excellent Shepherds sketch. We performed it last night at our carol service and it went down a bomb! As well as being very amusing yet to the point, it suited our actors well, with one main part and two very small one-liner parts. Thanks, Matt." - Matthew Ross.

Prettygate Baptist Church - "What impressed me was their clear and simple message, that wasn't cheesy, nor dishonouring to the Lord and communicated its message in a relatively short sketch. They are well written, original and thought-provoking. They needed minimal props and needed minimal preparation." Pastor Peter Shirtcliffe

Hinkley Baptist - "The sketches went down a storm!...very accessible sketches with a clear message to develop... We will definitely be doing more." Kate Philips.

ReSource - "Just a quick one to say that we used two of your sketches at a wild house party in Harnhill, Cirencester - the Shepherds and Noah, with the Magi as a backup. All received with wild enthusiasm, with cries of "Author, author" (honest!). Thank you........." Martin

"I am a Prison Chaplain and the skit I downloaded was in fact for our Prison Carol Service, which was this afternoon and evening. I chose the story of the Inn Keeper and the Guest, and its presentation quickly caught the attention of the prisoners and Governors - and guests - who were there. I do want to pass on to you the very favourable comments from the Governors about your script: I don't think they had come across this before! (I have been in the appointment 6 months). So, I am sure I shall be buying some more of your sketches as time goes on." - Andrew Foran, Anglican and Co-ordinating Chaplain 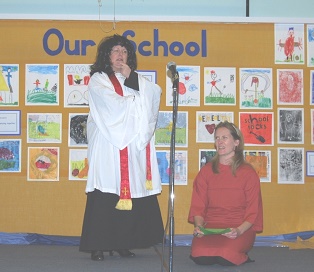 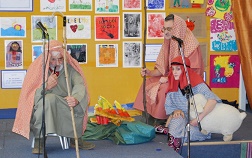 It was an absolutely wonderful show held in the local school for 2 nights. Completely packed both nights and I have to say I thought one of the best shows we have ever put on. We used 4 of your sketches. The Shepherds was hilarious, the best sketch of the night.
Roz played a very posh bossy Artist in the Nativity Scene 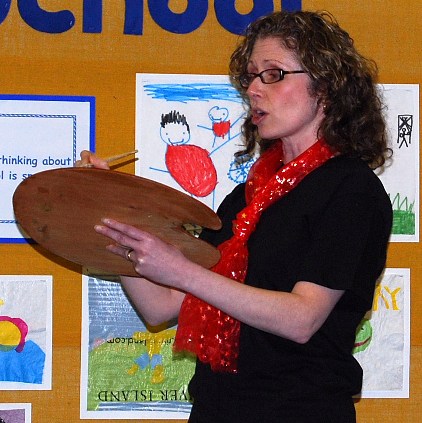 In Wise Men the Shop Keeper was kind of a Chav Scouser. 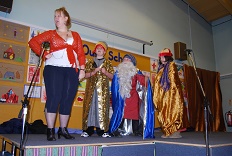 The Christmas Cards sketch was right at the very end. We played it as "The Vicar of Dibley & Alice" in their final joke section after the show and the audience absolutely loved it. I played The Vicar and i have to say I totally milked the whole thing it was great. The money we raised from the show went to "Water Aid" and our local "St Ann'e Hospice."So many many Thanks for providing such great material. - Denise Bartholomew, Churches Together in Boothstown, UK.

"We are using one of the skits I ordered from you at a church-wide women's event in mid-October. It's the skit where the person is praying on the phone and gets the recorded messages. (Calling on God) We will have the woman on the phone on the stage and the recorded message being performed offstage into a microphone. We love the script!" - Jody Mapston, USA

"Really great - Thank you. We used some in our Youth Christmas service on Sunday morning and they were really appreciated both for their humour and their message by young and old alike. We will definitely be back for more. People in Church are still talking about the service. Looking forward to using much more of your material as it was such a hit with everyone. The youth really enjoyed performing the sketches." - Vanessa & Roy Briggs - Christ Church Exmouth. (ordered Christmas Collection 1 and Christmas Collection 2 )

Sheng Te Christian College, Taiwan - "...exactly what I was looking for." Stef Coulombe

"We used two of your sketches ("Adam" and "Clothes Shopping") at our Minister's party, a fellowship tea followed by an evening of drama and music) celebrating his five years with us. It was a wonderful evening. In our drama, Adam, played by my husband all he wore was a dressing gown (bare feet the lot) starting with the joke that he wanted to come on just in a fig leaf but the powers that be would not allow it!! The skit Clothes Shopping was played by a young 16 year old as the woman, and myself, a 75 year old, - you can see we are a very mixed aged group - playing the Assistant. We had marvellous fun." - Joyce Davis

Folkestone Baptist Church - "The Wise Men sketch went down a storm on New Year's Eve, I briefly basked in the glory of having people think I wrote it myself but soon set the record straight!......." Lee-Anne

I performed your sketch 'Mastermind' at a church weekend away last weekend for a social evening and people thought it was hilarious. - Derek Walker

Pembury Baptist Church - "We recently performed the skit featuring the two guys waiting to audition for the nativity play. It was extremely well received! I think your scripts are great and I am always checking the sermon calendar for an excuse to use one!......" Tracey Gregory

Summer Camp, California - "You did a great job! I love your stuff! If you are ever in Southern California, I'll buy you dinner. ........." Frank Macy, Minister, Church of Christ at Orange, California, US.

We are W.O.W.Y. (Walk on Water Youth) from Summerfield North Carolina. Our teens are loving the skits purchased for them. - Rosemary Kenchel.

Plymstock United "We are a group of six elderly people and performed "Bring it to God" and "Clothes Shopping" when my Home Group were responsible for the evening service. Both were well received." Sheila Wood.

St. Nicholas Church Newbury - "I'd be delighted to add your link to our site. I'm also going to let the service planning teams have the details as we make more concerted efforts to add more of the spice of drama to our worship at St Nic's......" The Revd Dr David Stone

Well the three wise men skit went down a treat at our church! Alas there aren't any photos- which is a shame as our false beards and knitted jumpers were spectacular! Next time we use a sketch tho I will make sure that photos are taken! - Samantha Taylor.

"We performed 'Anorak' in 'The Revue' 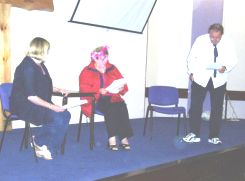 which took place at the end of our theological training. The young couple were played by a long-married (both ordained) couple in their sixties, and the vicar by myself. That juxtaposition, of course, added to the humour of those present. It was very well received, and comments included the appreciation that the humour was well judged, and did not cross the border to the inappropriate. Many people also noted your name when they found out where the sketch came from. As we are all taking up our curacies at present, I hope that your name will be remembered and more of your excellent work used in our ministries. Thank you for the work you do - I will certainly consider utilising other sketches in the future." Lyn Bliss - now NSM curate in the rural parish of Bucklebury, Bradfield and Stanford Dingley in Berkshire.

"We have used a number of these skits in worship at our small local church with an elderly congregation and have found them excellent in presenting a new approach to some well known Bible stories - a very good resource and much appreciated by those taking part and listening." Stuart Hunkin Tywardreath Cornwall

Radlett "We have now performed several of your sketches at Radlett, they fit our congregation's spirituality and sense of humour very well. I anticipate purchasing another volume soon! Best wishes" Alan Callow 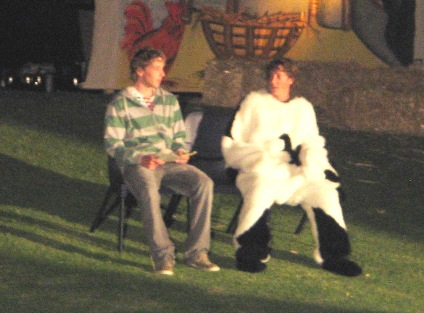 St Cuthbert's in Oborne, Dorset - "We haven't performed any yet, but are in the early stages of preparation. The rector's idea is that we could perform these at the monthly Family Services in Oborne, perhaps starting with the next one. Best wishes, and I do like the skits - well-written, succinct and thought-provoking. Thank you......" Mike